Del Shores’ Sordid Lives is coming to LOGO as a series featuring most of the film’s cast including Olivia Newton-John as Bitsy Mae. The series will be a prequel to the play and film. 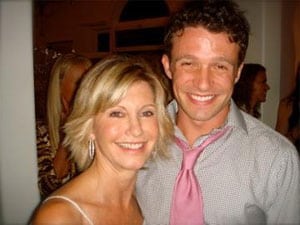 “Olivia has been offered the role of ‘Bitsy Mae’ in ‘Sordid Lives: The Series’ and has agreed to reprise her film role, subject to final negotiations. ‘Bitsy Mae’ appears in eleven out of the twelve episodes, with a much more pivotal role than in the film. Olivia will also write music that she will perform in many episodes and sing the familiar ‘Sordid Lives’ theme song during opening credits. Leslie Jordan (‘Brother Boy’), Delta Burke (‘Noleta’), Beth Grant (‘Sissy’), Ann Walker (‘LaVonda’), Rosemary Alexander (‘Dr. Eve’), Newell Alexander (‘Wardell’) and Sarah Hunley (‘Juanita’) have also been offered their film roles and have agreed to do them, subject to negotiations. The series will also introduce Jason Dottley (from the nationwide tour) as ‘Ty’.”

Dottley (pictured above with Newton-John), who has been married to Del Shores since October 2003, also announced the production on his MySpace page and says that a film adaptation of Shores’ Southern Baptist Sissies will go into production in 2008 and “will also star Leslie Jordan, Joey Kern, Delta Burke, Newell Alexander, and Rosemary Alexander, as well as Rich Delia, Emerson Collins and T. Ashanti Mozelle” and Dottley.