Justin Theroux, who makes his directing debut shortly with Dedication and plays Jesus in the new film The Ten, and whose past is cluttered with gay (particularly gay and English) roles, talks to The Advocate‘s Brandon Voss about his gay fan base, his onscreen inclination toward shirtlessness, and being Therouxed. 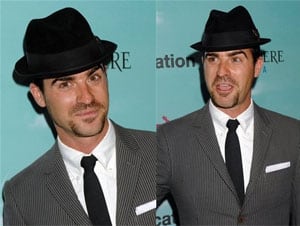 Says Theroux: “I always played gay and English. Literally, if it was a gay Englishman, I got the part. From [directors] Joe Orton [Loot] to Mark Ravenhill [Shopping and Fucking] to Frank McGuinness [Observe the Sons of Ulster Marching Towards the Somme] to [Kevin Scott’s] Hide Your Love Away. That’s four gay English people I played, and that’s pretty much my whole theater repertoire in New York…I’ve never given [a real-life gay opportunity] a shot, but I’ve had drunken advances in college—I did go to Bennington, after all. But it didn’t really pique my interest. I hope I’m comfortable enough in myself that if I even had a percentage of any of that in me, I would feel free to explore it. Actually, I know I would. But I feel pretty hetero.”

He also talks about his role in 2000’s THe Broken Hearts Club: “It was so nice to do a movie where the themes were gay but it didn’t club people over the head with it. If you took it out of the gay context, it was really more of a Big Chill. One of my favorite C[-list] celebrity sightings—which I’ve never gotten before—was when gay pride was just in town and I was walking down the street and someone said, ‘That’s the guy from The Broken Hearts Club!’ Made me laugh. That’s the first and last time that’ll ever happen.”