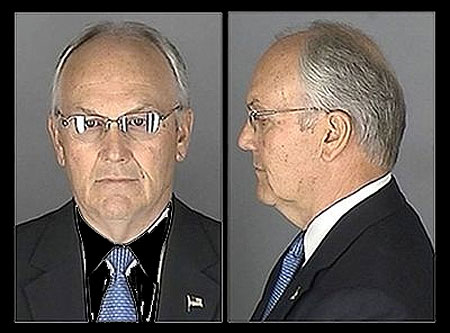 Idaho GOP Senator Larry Craig, whose arrest by a plainclothes police officer investigating lewd conduct complaints in a public men’s restroom in Minneapolis was brought to light yesterday, made the following statement to reporters this afternoon:

“In June, I overreacted and made a poor decision. While I was not involved in any inappropriate conduct at the Minneapolis airport or anywhere else, I chose to plead guilty to a lesser charge in the hope of making it go away. I did not seek any counsel, either from an attorney, staff, friends, or family. That was a mistake, and I deeply regret it. Because of that, I have now retained counsel and I am asking my counsel to review this matter and to advise me on how to proceed.

“For a moment, I want to put my state of mind into context on June 11. For 8 months leading up to June, my family and I had been relentlessly and viciously harassed by the Idaho Statesman. If you’ve seen today’s paper, you know why. Let me be clear: I am not gay and never have been.

“Still, without a shred of truth or evidence to the contrary, the Statesman has engaged in this witch hunt. In pleading guilty, I overreacted in Minneapolis, because of the stress of the Idaho Statesman’s investigation and the rumors it has fueled around Idaho. Again, that overreaction was a mistake, and I apologize for my misjudgment. Furthermore, I should not have kept this arrest to myself, and should have told my family and friends about it. I wasn’t eager to share this failure, but I should have done so anyway.

“I love my wife, family, friends, staff, and Idaho. I love serving Idaho in Congress. Over the years, I have accomplished a lot for Idaho, and I hope Idahoans will allow me to continue to do that. There are still goals I would like to accomplish, and I believe I can still be an effective leader for Idaho. Next month, I will announce, as planned, whether or not I will seek reelection.

“As an elected official, I fully realize that my life is open for public criticism and scrutiny, and I take full responsibility for the mistake in judgment I made in attempting to handle this matter myself.

“It is clear, though, that through my actions I have brought a cloud over Idaho. For that, I ask the people of Idaho for their forgiveness.

“As I mentioned earlier, I have now retained counsel to examine this matter and I will make no further comment.”

Senate Republican leaders this afternoon called for an ethics probe of the Idaho lawmaker. Mitt Romney, for whom Craig had served as senate campaign co-chair, called Craig’s actions “disgusting”.