The NYT today runs a Joyce Wadler profile of Mitchell Gold and Bob Williams, the successful furniture designers who “divorced” five years ago after being together for 14 years. The article takes a look at their Jim Bartholomew-designed Manhattan apartment and the view Gold says it took him “30 years to get,” and it also navigates the ins and outs of running a successful business with a once-romantic partner and how properties and possessions are handled after a breakup. The article also ends just as it gets going: 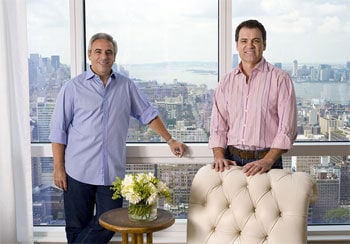 “Mr. Gold has said that when he was 14, he decided that if he couldn’t ‘cure’ himself by the time he turned 21 he would kill himself. By the time he was in college, he was so depressed that his father, unaware of the reason for his depression, sent him to a psychiatrist.

‘I uttered the words, ‘I think I’m gay and I want to be cured,’ ‘ Mr. Gold says.’I remember him saying, ‘I can’t cure you of that, but I can work with you about how to live with it.’ He taught me this was the way it was and it was O.K. Of all the lucky things in the world that happened to me, I feel lucky that I got to go to a psychiatrist who told me it was O.K. Because in those days, the early ’70s, I could just as easily have hit a psychiatrist who said it was not O.K. If you grow up in Taylorsville or Hickory, N.C., they’re going to send you to some quack doctor who’s not really a doctor, to try cure your homosexuality.’

Being able to tell his parents that he was gay was still difficult for Mr. Gold. At 24, he blurted it out to his mother on the phone when he called one Sunday morning. Still half asleep, he told her he was going to St. Thomas for a week with his friend Michael. ‘She said, ‘I don’t understand why you do everything with Michael — why can’t you get a girlfriend?’’ Mr. Gold says. ‘I said, ‘My idea of a girlfriend is Michael.’

There were tears and an argument, but these days Mr. Gold’s parents, both 86, are very accepting. When he called to tell them that he and Mr. Williams had decided not to be a couple anymore, his mother demanded to know if they would still be able to see Bob. Which is exactly the way Mr. Gold felt it should be.”

Previous Post: « San Francisco Officials on Halloween: “There Will Be No Party”
Next Post: One of Two Suspects Caught in Hate Crime Killing of Satendar Singh »