Four of San Diego’s city firefighters have filed a request with the state Department of Fair Employment and Housing asking for the right to file a sexual harassment lawsuit against the San Diego Fire-Rescue Department after they say they were forced to participate in the San Diego gay pride parade that took place on July 21. The firefighters say that while taking part in the parade they were sexually harassed, according to 10news:

“During the parade, the firefighters said, bystanders taunted them with sexually explicit comments and colleagues called to tease them for participating in the event. ‘I was forced into a situation that would compromise what I hold true and what I believe in,’ engineer Jason Hewitt said in a statement. The four contend the department failed to protect them from sexual harassment and didn’t immediately act to correct the situation, Stirling said.” 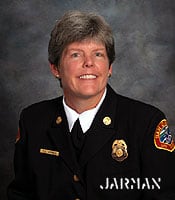 Fire Chief Tracy Jarman, a lesbian, has apologized to Fire Capt. John Ghiotto, Engineer Jason Hewett and firefighters Chad Allison and Alex Kane and says she’s having the the city’s Equal Employment Investigative Office take a look at the situation, according to the San Diego Union-Tribune. The city’s firefighters have participated in the gay pride parade for the last 15 years without incident.

Says CBS8: “They’re trained to risk their lives battling fires, but some local firefighters suggest nothing could have prepared them for the insults and obscenities they faced at this year’s gay pride parade.”

The Union-Tribune reports: “In statements filed with the state, the men said that along the parade route, they were subjected to offensive lewd comments such as, ‘You can put out my fire,’ and saw men blowing kisses at them. Then, they said, they had to endure protesters who yelled at them that homosexuality was a sin. Some comments were too risque to print.”

So, according to the paper, they had to endure men complimenting them for their looks, as well as experience first-hand the religious bigotry gay people must endure every day.