The U.S. Episcopal Church, in a move meant to patch the international rift in the Anglican church since the consecration of openly gay bishop Gene Robinson in 2003, announced on Tuesday that they would no longer be consecrating any gay bishops and will not be publicly blessing any same-sex unions until there is more consensus on the practice. 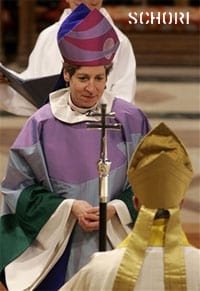 The Associated Foreign Press reports: “The Episcopal House of Bishops reaffirmed its decision to ‘exercise restraint by not consenting to the consecration of any candidate to the episcopate whose manner of life presents a challenge to the wider church and will lead to further strains on communion.’ The church leaders also pledged ‘not to authorize or use in our dioceses any public rites of blessing of same-sex unions until a broader consensus emerges in the Communion or until (the) General Convention takes further action.’ But it was not clear whether clergy would be allowed to carry out unauthorized blessings of same-sex unions. The statement meant to clarify the church’s position noted that clergy have a pastoral duty to ‘respond with love and understanding to the people of all sexual orientations… (and) maintain a breadth of private responses to situations of individual pastoral care.'”

Said Presiding Bishop Katharine Jefferts Schori: “This resolution really is the result of finding common ground to stand on. Not everyone was 100 percent happy with every word in this document, as you might imagine, but together we believe that we have found a place that all of us can stand together.”

According to the Church Times, “The statement also asks for more progress in the listening process, called for at the 1998 Lambeth Conference, to ensure that the views of gays and lesbians were heard more widely around the Communion. And it affirms the Church’s commitment to protect the civil rights of gay and lesbian people, ‘and to name and oppose at every turn any action or policy that does violence to them, encourages violence toward them, or violates their dignity as children of God.'”