After the clip of last night’s telethon, in which comedian Jerry Lewis identified a member of the audience as “the illiterate fag”, made its way to the internet this morning, there was an understandable objection as well as a statement from GLAAD calling on Lewis to apologize. 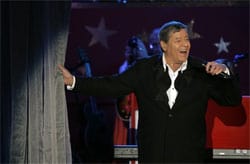 Lewis has done just that, in a statement “to anyone who was offended.”

Said Lewis: “I obviously made a bad choice of words. Everyone who knows me understands that I hold no prejudices in this regard. The success of the (telethon) and all the good that will come from it shouldn’t be lost because of one unfortunate word. I accept responsibility for what I said. There are no excuses. I am sorry.”

You may have missed…
Jerry Lewis Points Out “Illiterate Faggot” in Telethon Audience? [tr]