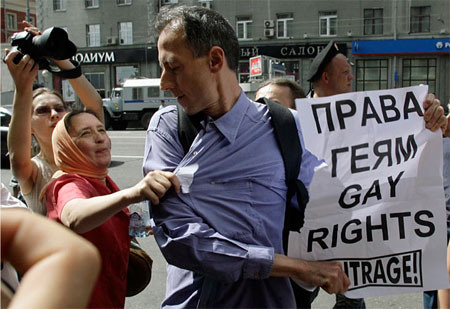 Newsweeks international editions (Europe, Asia, and Latin America) this week look at gay rights struggles around the world accompanied by an an online gallery featuring some of the defining images of the last year, including this shot of British gay rights activist Peter Tatchell being harassed by a woman on the street in Moscow, moments before he and others were more brutally assaulted by nationalists and skinheads.

Also included are a couple articles about Jamaica as well as a Q&A with Sir Ian McKellen.