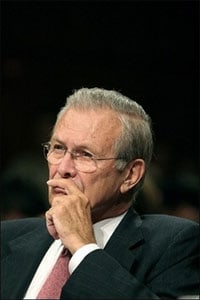 GQ features a lengthy interview with former Secretary of Defense Donald Rumsfeld in the latest issue, which eventually gets around to the subject of gay people:

GQ: DHR still lives by a code that no doubt served him well—to a point. You don’t self-aggrandize, you don’t kiss and tell, you don’t open a vein and act like you’re on Oprah. An example: I tell him I’d really love to know where he stands on social issues. He has lived a life fuller than most, and his intellectual wattage is undeniable. Surely he has thought about some of this stuff. He snorts. No, really. How does Donald Rumsfeld feel about gay marriage, abortion, etc.?

GQ: Yeah, but you’re not anymore.

A lackey till the end, no matter who it hurts?

OFF THE RECORD WITH DON RUMSFELD [gq]