California Governor Arnold Schwarzenegger has not changed his position on same-sex marriage and will not, he told news media at a press conference regarding his health care plan on Monday. 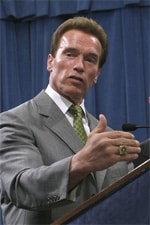 Said Schwarzenegger: “It would be wrong for the people to vote for something and for me to then overturn it. So they can send this bill down as many times as they want, I won’t do it.”

The SF Chronicle reports: “Schwarzenegger vetoed a gay marriage bill in 2005, citing the 61 percent of voters who favored Proposition 22 in March 2000. He announced in February that he would veto the bill again if it reached his desk this year. Despite the announcement, lawmakers approved it before adjourning last week. Schwarzenegger has until Oct. 14 to act on the measure.”

The California Senate approved the Bill on Friday, September 7th by a 22-15 vote. It was then sent to the governor. This bill defines marriage as “a civil contract between two persons” according to the AP, and would “retain the right of religious institutions to refuse to sanction the unions.”