On Monday, TMZ reported that Barry Manilow pulled out of a scheduled appearance on The View because he disagreed with Elisabeth Hasselbeck’s conservative point-of-view. 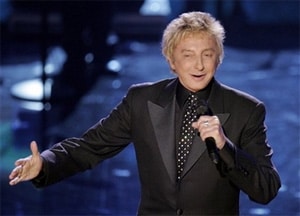 Manilow posted the following message to fans on his website: “I wanted to let you know that I will no longer be on The View tomorrow as scheduled. I had made a request that I be interviewed by Joy, Barbara or Whoopi, but not Elisabeth Hasselback. Unfortunately, the show was not willing to accommodate this simple request so I bowed out. It’s really too bad because I’ve always been a big supporter of the show, but I cannot compromise my beliefs. The good news is that I will be on a whole slew of other shows promoting the new album so I hope you can catch me on those.”

Whatever happened to agreeing to disagree? 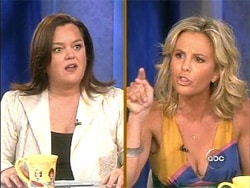 Access Hollywood is now reporting that sources from The View say Manilow is lying: “Sources told Access the show is the one who cancelled the booking because they would not allow the ‘Copacabana’ singer to dictate who would interview him. In addition, the appearance has been scheduled since July (which is after Rosie left the show) and that Manilow has appeared twice on the show in the past with Hasselbeck on the panel. The sources suggest Manilow is causing a stir in order to create a buzz as his new album, Greatest Songs of the Seventies, is getting ready to debut.”

Manilow told Access: “It was the most fun I’ve had in a long time. She is just inspiring because you know she’s not a singer. She knows that, but she just got behind the microphone and ripped away. She was great and in tune too. The problem was, as I put the album together, it became a very romantic album. And having this thing come crashing in out of nowhere, the tone just didn’t feel right. It’ll probably wind up being a bonus cut somewhere.”