The Employment Nondiscrimination Act, or ENDA, is to be taken up by the Education and Labor Committee next Tuesday, and sent to the House floor after that for a vote. It will not include protections for transgender people as a preliminary vote revealed that because of the trans-inclusive nature of the bill it did not have enough support to pass, the Washington Post reports. 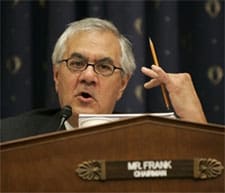 Via WaPo: “The last time Congress took up ENDA was in 1996, when it failed to clear the Senate by just one vote. It should have passed then, and it most certainly should pass now. The bill will not give ‘special rights’ to homosexuals, as opponents claim. The reality is ENDA will give homosexuals basic civil rights on a federal level. If the legislation is passed, it would be illegal to fire, refuse to hire or refuse to promote an employee because of the person’s real or perceived sexual orientation.”

Barney Frank discusses the decision on the Bilerico report.