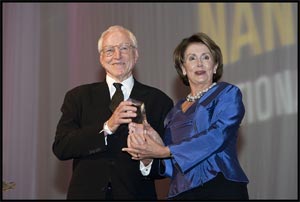 She finished her speech with a statement on ENDA:

“As members and supporters of HRC, you understand that it is truly historic that the House of Representatives will soon pass the Employment Non-Discrimination Act. The tremendous progress we have would not have been possible without the great leadership of Chairman Barney Frank of Massachusetts. With his brilliance, his wit and legislative skill, he persevered in bringing ENDA before the Congress. America is a great and wealthy country, but we cannot afford to squander the talents of any of our citizens, nor should we. We all benefit if everyone gets a chance to work hard, and support their families. Yet today, in more than 30 states you can be fired for being gay, lesbian, bisexual or transgender. That is wrong. Federal action is needed, and it is long overdue. I strongly believe that transgender individuals deserve the same rights and the same protections as any other Americans and will work to see that ENDA also protects their rights. In a few weeks, the House will be voting on ENDA. And those who oppose us will be lobbying on the Hill and working to defeat any version of ENDA. We cannot allow the forces of discrimination succeed. Barney Frank, Tammy Baldwin and others will do the inside maneuvering. But we cannot succeed without outside mobilization. Working together, we will mobilize, and educate. Each and every one of us must take personal responsibility for passing the strongest possible ENDA – one vote at a time. History teaches us that progress on civil rights is never easy. But justice is inevitable. It’s about time. Many saw the 1957 Civil Rights Act as not having done enough, but it helped lay the groundwork for the great Civil Rights Act that followed. On the occasion of receiving the HRC Equality Award, I give you my commitment as Speaker of the House that I will fight for the most inclusive ENDA possible so that our nation’s laws are in harmony with our nation’s ideals. “