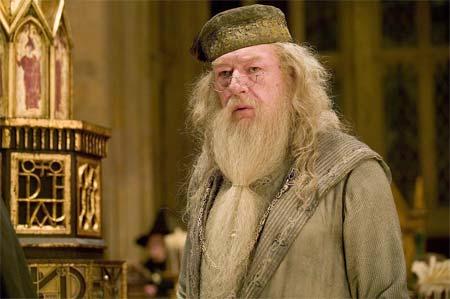 You’ve probably heard by now that Harry Potter author J.K. Rowling outed her character Hogwarts headmaster Albus Dumbledore during a question-and-answer session at Carnegie Hall Friday night in response to a question from a 19-year-old fan. He asked, “Did Dumbledore, who believed in the prevailing power of love, ever fall in love himself?” 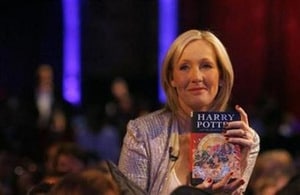 Rowling replied, to the reported shock and delight of the audience there: “My truthful answer to you…I always thought of Dumbledore as gay…Dumbledore fell in love with Grindelwald [a bad wizard he defeated long ago], and that added to his horror when Grindelwald showed himself to be what he was. To an extent, do we say it excused Dumbledore a little more because falling in love can blind us to an extent, but he met someone as brilliant as he was and, rather like Bellatrix, he was very drawn to this brilliant person and horribly, terribly let down by him…Yeah, that’s how I always saw Dumbledore. In fact, recently I was in a script read-through for the sixth film, and they had Dumbledore saying a line to Harry early in the script saying, ‘I knew a girl once, whose hair…’ I had to write a little note in the margin and slide it along to the scriptwriter, “Dumbledore’s gay!”

The revelation had fans looking for new meaning in some of the passages.

Reuters reports: “Fans on the top Potter fan site TheLeakyCauldron.org (http://www.the-leaky-cauldron.org) were divided on the news, some uncertain Rowling wasn’t going to backtrack on the announcement, others saying it was unnecessary, and some welcoming the extra information on Dumbledore. ‘This is even more awesome because it adds another layer to Dumbledore’s character, which is already so rich and complicated. I hope he got over Grindlevald (sic) and fell in love again,’ wrote Amanda.”

British gay activist Peter Tatchell of the group Outrage! welcomed the news but felt Rowling should have let people know in the books. Said Tatchell: “It’s good that children’s literature includes the reality of gay people, since we exist in every society. But I am disappointed that she did not make Dumbledore’s sexuality explicit in the Harry Potter book. Making it obvious would have sent a much more powerful message of understanding and acceptance.”

Others weren’t so pleased. A post on the blog Red State labeled Rowling a fascist: “I wonder where her tolerance was for those readers who have beliefs different from hers. Where was the respect for them? Don’t they too have a right to avoid and hide themselves away from ideas and themes they disagree with? I guess not. After all, there is no crime in creating an endearing story that is acceptable and appealing to many, and then pulling the rug out from under the readers later by revealing some disconcerting facts about a beloved character. Subversive yes, but I guess she was within her rights. (Thankfully, she kept this latest revelation out of books, so at least I can pretend it never happened)”

Rowling herself was thrilled with the reaction to the news, and said: “Just imagine the fan fiction now.”