More details have emerged regarding Rev. Donnie McClurkin’s appearance yesterday at Barack Obama’s “Embrace the Change” Gospel Tour. Actually, McClurkin made more than an appearance. He emceed the event, the Washington Post notes. Andy Sidden, the openly gay minister whom Obama called in at the last minute to counter the furor over McClurkin, offered the event’s opening prayer: “Sidden’s prayer noted the importance of people of all races, backgrounds and sexual orientations coming together.” 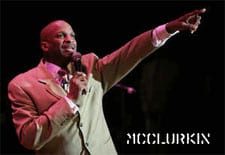 It sounds as though the only change Rev. Donnie McClurkin hoped folks would embrace, however, was the one he claims to have made from gay to straight, because it was on that note that the controversial singer went out.

Said McClurkin near the end of his appearance: “I’m going to say something that’s going to get me in trouble…They accuse me of being anti-gay and a bigot. We don’t believe in discrimination. We don’t believe in hatred, and if you do you are in the wrong place at the wrong time. That’s the whole premise of God. That’s the whole premise of Christ is love, love, love. But there is a side of Christ that deals in judgment, and all sin is against God…Don’t call me a bigot or anti-gay, when I have been touched by the same feelings. When I have suffered with the same feelings. Don’t call me a homophobe, when I love everybody … Don’t tell me that I stand up and I say vile words against the gay community because I don’t. I don’t speak against the homosexual. I tell you that God delivered me from homosexuality.”

Calling the last hour of the concert “a revival meeting about the lightning rod he has become for the Obama campaign, the NY Times reports that “[McClurkin] then told the audience to believe the Bible over the blogs: ‘God is the only way.’ The crowd sang and clapped along in full support.”

And via AmericaBlog comes this addendum from the Washington Post:

“…while the crowd left excited, it was clear the campaign still regarded the controversy as complicated. Aides gave reporters a three-page memo detailing McClurkin’s and Obama’s views on gay rights that noted in capital letters ‘MCCLURKIN DOES NOT WANT TO CHANGE GAYS AND LESBIANS WHO ARE HAPPY WITH THEIR LIVES AND HAS CRITICIZED CHURCH LEADERS WHO DEMONIZE HOMOSEXUALS,’ with quotes detailing those statements from the singer. The next paragraph then stated ‘OBAMA DOES NOT AGREE WITH MCCLURKIN’S VIEWS ON GAYS.'”