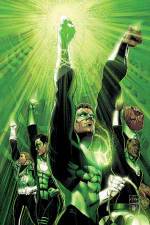 According to SciFi.com, “The first incarnation was radio engineer Alan Scott, who was the Green Lantern during the Golden Age of Comics. Alan Scott found that, because he was holding a mysterious green lantern, he was the only survivor of a horrible accident involving a train and an exploding bridge. This lantern and ring were powered by the mysterious ‘Green Flame’, whose origins were linked to a space meteor that fell to earth in ancient China.” The Hollywood Reporter notes that “The biggest challenge in setting up ‘Lantern’ was waiting for the technology to become available to create fantastical worlds as well as overcoming the prejudice of a ring-bearing hero.”

Berlanti told the Reporter: “To me, this was on the last great comic book movie that hasn’t been made. It was a comic book with a real mythology that you would see in a lot of the space operas and the sci-fi books. The best part about it, anybody can be become one of the Green Lanterns because anyone can end up with that ring. The danger and the fear from a lot of people is that it would be silly. In these post-‘Harry Potter’ and ‘Lord of the Rings’ days, it’s not any more fantastical than that. It’s taken movies like that to make it feel as if a Green Lantern film is possible.”

Incidentally, in 2002 Green Lantern became the first major comic series to introduce a storyline based around an anti-gay hate crime.

Previous Post: « McClurkin at Obama Event: “God Delivered Me from Homosexuality”
Next Post: Scientists: AIDS Came to U.S. from Haiti in 1969 »