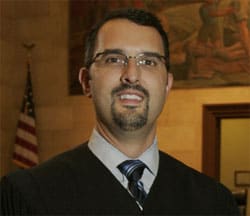 Anders, who will be the youngest of 93 judges in Common Pleas, told the Philadelphia Inquirer: “Though lots of people know I’m gay, the coming-out process really doesn’t end. It’s important to be who you are and to be happy with yourself. Many other courageous people came out before me. Being gay doesn’t define who I am or impact my job in any tangible way, but maybe I can be a role model for some gay kid or inspire someone to get involved in politics. I view being a judge as a career move. I think the bench benefits from having judges there for 20, 30, 40 years. I’d like to stay for as long as people will elect me.”

Anders decision to take the bench was not without sacrifice: “In his world, public service trumps money. He donates so many of his services to the gay community that he jokingly refers to it as ‘pro homo pro bono.’ Jeff Guaracino of the Greater Philadelphia Tourism Marketing Corp. says Anders ‘could have made a fortune as a partner, but he chose to ensure justice for the gay community.’ In hard dollars, Anders took a $100,000 pay cut from his former salary. Given that he was on track to make partner next month, the difference would have been exponentially larger.”