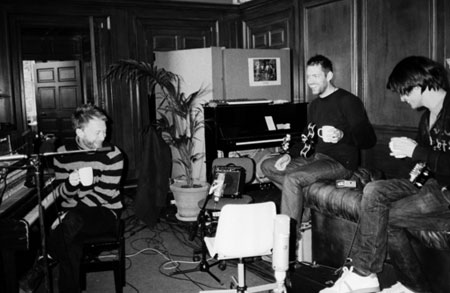 Radiohead, releasing their new album In Rainbows on October 10, have told fans they can pay whatever they want for it.

The Telegraph reports: “While loyal fans are likely to want to pay the band something, customers could opt to pay as little 45p – the credit card handling fee. The album is also available separately as part of a £40 box-set which includes the album on CD, two vinyl records, a CD with additional songs, photos, artwork and lyrics. It is Radiohead’s first album since Hail to the Thief, which was released in 2003 after which the band’s contract with EMI/Capitol expired.”

Telegraph blogger Shane Richmond notes: “None of the things Radiohead are doing with this is unique. All of them have been developed and used by other artists for quite some time. But this is Radiohead. When one of the world’s biggest bands does something like this, it will get noticed and it will start people thinking. Record labels survived for years on the value they added to the process. They made it possible for bands to make records and get them into the stores and then used their marketing weight to get those records played on the radio and featured in magazines. In the process they made enormous profits by overcharging fans and underpaying artists. They no longer add any value to the process. In fact, they act as a barrier between fans and musicians. It’s time to move them out of the way and Radiohead have just showed us how.”