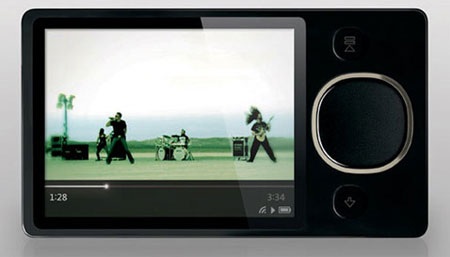 Please welcome Jon Barrett, who has come in from the heat wave we’re having here in New York to tell us about the new Zunes, flatscreen TVs, downloading lawsuits, and appliances for those of you who can’t hold it in any longer.

Microsoft’s Zune gets a face-lift next month. The company introduced three new models, including 4GB and 8 GB flash devices and an 80 GB player. The new Zunes have a touch-sensitive control panel so you can flick through tunes, and the music store has been expanded to include more than a million DRM-free MP3s. There’s also a new website, Zune Social, so Zune owners can get together and show what they’re listening to, via Zune Cards. Apple could learn a thing or two from this update, too. As Microsoft reports: Existing Zune owners will automatically receive new software features, the redesigned PC and device software, and access to the new Zune Marketplace. 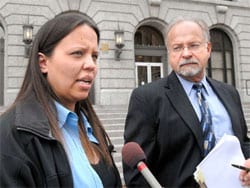 Yikes. A jury on Thursday ordered a woman to pay $220,000 for sharing more than 1,700 songs on the former peer-to-peer file sharing site Kazaa. Jammie Thomas is the first of the 26,000 people sued by the Recording Industry Association of America to make it to court. ABC News reports: "The judge instructed the jury that for Thomas to be found guilty, the RIAA needed to prove only that the files were made available on Kazaa, not that anyone copied them."

Verizon Wireless unveiled three new phones for the holiday season, including the LG Voyager, which the company hopes will compete with the iPhone. Verizon says the new phone will attract customers who are put off by the iPhone’s lack of a traditional keyboard—the Voyager’s hinges open to reveal a small computer keypad and a second screen. Avi Greengart tells Reuters: “People who want a high-end media phone and want to stay with Verizon will certainly give that one a hard look. I don’t know that it would pull anybody away from an iPhone.” 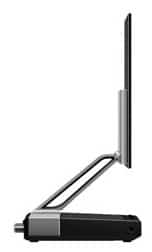 Sony announced that it is releasing the world’s first ultra-flat TV in Japan in December. Using Organic Light Emitting Diode (OLED) technology, the screen is only .12-inches thick, stands 5.6 inches tall, and is 9.9 inches wide. It will cost $1,740. Pretty pricey for its size. Meanwhile, if you can wait until at least 2010, Sharp says it will have a 52-inch LCD set that is only 1.14 inches thick. No word on how much that baby will cost.

I didn’t make my way to Facebook until very recently (I got stuck on Friendster for way too long). But I’ve been there long enough to get a good laugh out of Crackbook, "an addictive social utility that makes you feel you’re connecting with people when you’re really not." As Wired.com reports, the fake site by London writer Dave McCandless has only one profile—for a guy named Mercutio Ritz who has posted 93,389 photos of himself and whose friends virtually gift him with sexually transmitted diseases. 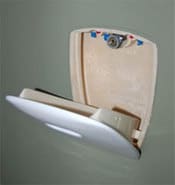 If you’re one of those guys who has always gotta go, check out Mister Miser, a folding home urinal. As Gizmodo describes: Not only is it great for people who hate wiping their pee off the toilet seat, it’s great for conservationalists as well — it only takes 10 ounces per flush. Ten!”

Neiman Marcus is selling a sexy new iPod device—the iLuv. Gizmodo reports: Its 8.4-inch widescreen LCD will show you those DVDs in slim style, and when you’ve had enough of that, your 30GB, 60GB or 80GB iPod stands at the ready, nestled within its chic confines, complete with a little window through which you can see the iPod screen. 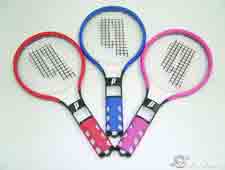 Starting November 15 you can pick up one of these Prince rackets made especially for your Wii tennis game. They come in three colors, cost $15, and will be sold exclusively at Circuit City stores.

Here’s another look at those Solar Trees we talked about last week. They’re hitting the streets in Vienna on Monday.

Newegg.com is the sponsor of the Towletech. In case you didn’t know, Newegg is a well-regarded online retailer of all kinds of consumer electronics. (Mike)