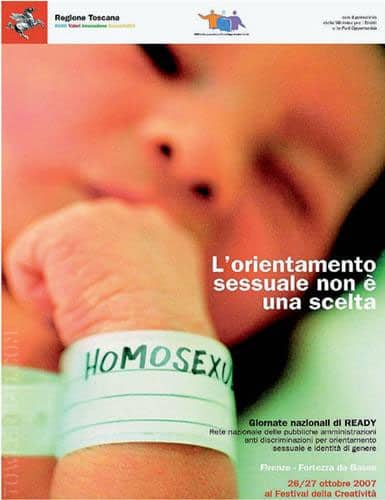 Tuscany’s regional government is set to post thousands of posters of a newborn infant wearing a wristband labeled “homosexual” as part of an anti-discrimination campaign.

The posters say “Sexual orientation is not a choice.”

Said Tuscany region’s civil rights councillor Agostino Fragai: “Homosexuality is not a vice and hence should not be condemned nor marginalised, or worse still persecuted.”

Conservatives (and even some left-leaning politicians concerned with the lack of genetic proof) in Italy are up in arms. Said Christian lawmaker Lucio Volonte: “Exploiting newborns to suggest that homosexual tendencies are innate is a misleading and shameful act.”

You may have missed…
Is There Such a Thing as a Gay Walk? [tr]
Gaydar: Do You Have A Counter-Clockwise Whorl? [tr]

Previous Post: « Another look at the Larry Craig – Matt Lauer Interview
Next Post: Seal Said to be Amazing »