Monsignor Tommaso Stenico, a high-ranking Vatican cleric who was suspended after being recognized propositioning a young man on a TV program about gay priests, insists he is not gay, and says he was pretending to be gay to gather information about “those who damage the image of the Church with homosexual activity.” 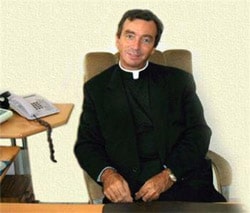 The program was broadcast on a show called “Exit” on Italian network La7. On the program, Stenico, 60, a top official in the Vatican’s Congregation for Clergy, reportedly says he “didn’t feel he was sinning” by having sex with gay men. The Congregation for Clergy “aims to ensure proper conduct by priests” according to the AP. While faces were blacked out in the video, Vatican officials recognized the background —Stenico’s office.

The AP reports: “Stenico was secretly filmed making advances to a young man and asserting that gay sex was not sinful.”

The Guardian offers details about the interview (seen here): “The six-minute sequence was said to have been captured by a young man who had come into contact with a Vatican official via an internet chatroom. He was invited to have sado-masochistic sex and arrangements were made for a meeting in St Peter’s Square. Unknown to the older man, the other man, who said he wanted to expose the hypocrisy of the Catholic church, arrived equipped with concealed video and audio recording equipment. Television viewers saw the Vatican official sit alongside his guest and say: ‘You’re very good-looking.’…’Thank you,’ replied the younger man, before putting it to his host that he was about to commit a sin. ‘I don’t feel it is a sin,’ said the official. When the other man insisted that it was at odds with the teaching of the church, the Vatican official brought the conversation to an abrupt end. When his guest bade farewell, saying ‘It’s been a pleasure,’ the Vatican official replied: ‘Not for me, because you don’t fancy me.'”

Stenico gave an interview to Italian newspaper La Repubblica, in which he denied the charges: “It’s all false; it was a trap. I was a victim of my own attempts to contribute to cleaning up the Church with my psychoanalyst work. His aim, he said, was ‘to better understand this mysterious and faraway world which, by the fault of a few people — among them some priests — is doing so much harm to the Church.'”