Disgraced Senator Larry Craig dug in his heels, refused to resign from the U.S. Senate, and his strategy seems to have paid off, at least for the moment. 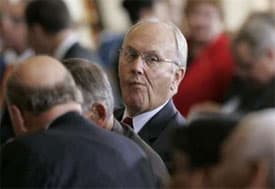 The Hill reports that Senate Republican leaders have eased up on the pressure they put on Craig to resign when the scandal broke, and Craig looks likely to maintain control over the earmarks he had attached to appropriations bills:

“Leaders have opted not to use the leverage they could exert on Craig by threatening to strip more than 20 spending projects he has sponsored by himself in various appropriations bills. Craig has used these projects to argue that his continued presence in the Senate is valuable to Idaho constituents.”

Craig has, however, been stripped of his position on three committees.

GOP leaders have apparently decided that in terms of Craig, the less attention they can draw to him the better.

GOP will let Craig keep his earmarks [the hill]