British photographer John Ross MacLeod, 63, is being held on sodomy charges in Ghana after officials searched his bag for drugs and instead found a CD with sexually-explicit photos of MacLeod and a 19-year-old Ghanaian man whom he had traveled there to visit. 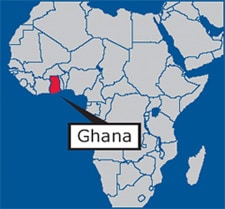 Sodomy and homosexual acts are illegal in Ghana. MacLeod reportedly met his friend, Emmanuel Adda, over the internet.

Ghana’s Joy Online reports: “The Deputy Director General said Macleod arrived in the country on October 2, 2007 and was met on arrival by Adda, who took him to a hotel at Dome an Accra suburb. He said Adda, who lives at the Christian Village, near Achimota, took Macleod home and introduced him to his parents as a pen pal from the UK who was visiting Ghana. Mr Yeboah said because Adda was awaiting his results, he was able to accompany the suspect to the Kakum National Park, near Cape Coast, the Elmina Castle and Lake Bosumtwi among other places of interest…”

Said police spokesman Charles Darkwa: “During his stay in Ghana, Adda traveled round the country with Macleod, who took the opportunity to sodomize him and took pictures as well.”

The Ghana media outlet adds: “They pleaded guilty to the first count of unnatural canal (sic) knowledge and were convicted on their own guilty plea to GHc600 (¢6 million) each or in default six months imprisonment. Macleod pleaded not guilty to possessing obscene pictures and was granted a GHc5000 (¢50 million) bail with three sureties, whom he could not provide. The two are in custody.”