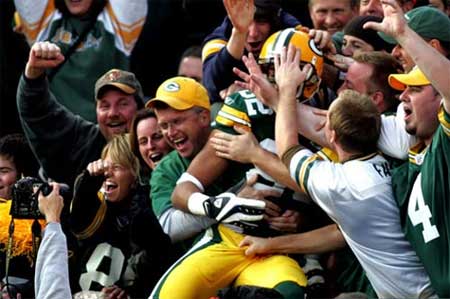 Deadspin reports: “You know, it was inevitable that this would happen at some point: During a Lambeau Leap, some fan grabbed wide receiver Ruvell Martin’s crotch…620 WTMJ is trying to find out who the phantom grabber is, and Donald Driver — who we supposed would know about this stuff — says, ‘that just ain’t right.’ We can’t believe this isn’t a regular occurrence, frankly.”

At the risk of descending into sick prurient territory (although I suppose I’m already there), it’s quite possible that the fan just wanted to say he had touched a real live cheesehead.