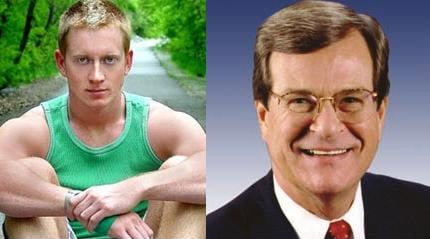 The decision to retire only one year after a re-election many people saw as a rebound from the Throm Sturmond birthday scandal that caused him to lose his Majority Leader post had some scratching their heads.

Others are already alleging that it’s a pre-emptive resignation designed to lighten the fallout from a scandal that is just about to hit.

That’s what the site Big Head DC is saying, anyway:

Via Big Head DC: “The boy happens to be real, and his ‘stage name’ is Benjamin Nicholas. One of the politicos Big Head DC has learned he’s alleged to have been involved with is the married Sen. Trent Lott, 66, who unexpectedly announced his retirement on Monday. Lott is well-known to have been against a plethora of gay rights issues throughout his terms in Congress. He was also good friends with Sen. Larry Craig throughout his time in Congress. Nicholas told Big Head DC today via e-mail that he didn’t want to go on the record to talk about his dealings with Lott, because, said Nicholas, ‘Trent is going through his fair share of scrutiny right now and I don’t want to add to it.’ However, e-mail and other records confirm that the two have met on at least two occasions. ‘All I can say at this point is no comment,’ Nicholas told us. ‘It’s the professional thing for me to do.’ In a subsequent e-mail message, Nicholas confirmed that another publication is working on a story about a ‘possible relationship’ between Lott and himself, but Nicholas also ‘politely declined’ an interview for that story. ‘As I said before, Lott has quite a bit on his plate right now and I don’t really want to add fuel to the embers,’ Nicholas told Big Head DC.”

More at the source. Benjamin Nicholas, the alleged escort, who once wrote an article for Seattle’s The Stranger newspaper about the importance of confidentiality in the escort business, is denying relations with Lott: “I will continue to offer a great sense of confidentiality to the people I see. I have not, nor have I ever seen or had contact with Senator Trent Lott. It’s as simple as that. It never happened.”

And as far as that “other” publication, Larry Flynt just told FOX he’s “hoping to expose a bombshell” within the next week or two. We’ll see, I guess.

Take it for what you will, but given that 2007 is the year of the hypocritical Republican, nothing would surprise me.