I’ve always been a huge fan of Mary J. Blige, but after reading her cover interview in the forthcoming issue of The Advocate, my respect for her has grown by leaps and bounds. 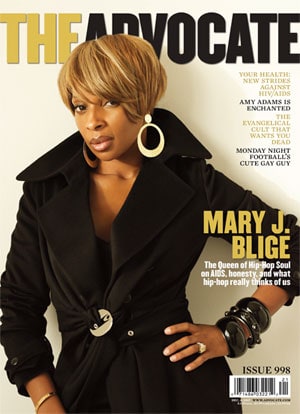 “The majority of my fans are gay,” she tells writer Ernest Hardy. “The majority of them are, and I have to really make sure that they know I’m paying attention to the fact that they support me, and I support them.”

Blige talks about her youth: When I was growing up, my neighborhood was full of everyone—black, white, Latino, gay, straight. A lot of people that I knew were gay, but they were great people. They were good people. It’s not like they were alien. They were just people. That [acceptance] was just something that was always in me. I’ve never been a judgmental person because I have been through so much hell myself.”

She also talks about the loss of her close friend songwriter Kenny Greene to AIDS, and why she got involved with causes like Minority AIDS Project: “[AIDS] was the elephant in the room that nobody’s looking at. It made me be like, Oh, this is right at our front door. This can touch us. So why wouldn’t I want to get involved with something that can help save all our lives, save everybody’s lives?”

And of homophobia in hip-hop, she adds: “The real hip-hop, the real people don’t even care about that. They’ll love you and accept you no matter what because they know who they are. There are a lot of people trying to figure out who they are and what they’re gonna be. There’s a lot of confusion in that. Confusion causes a lack of identity. I’ve heard a couple of guys say foul things, and those guys are not around me anymore because when they say things like that, I’m looking at them like, What makes you so scared? You don’t know who you are? I guess it all boils down to them not being sure about themselves and what they wanna do, whoever that is. I won’t say any names. And I don’t dislike them or anything—it just makes me wonder about them period. ’Cause if you’re not sure about that, then you ain’t sure about a lotta things!”

It’s a lengthy interview, with plenty of info on her new album Growing Pains. It hits newsstands on November 20.

Previous Post: « Sir Ian McKellen Thinks Justin Timberlake Should Play Him on Film
Next Post: Actor Scott Caan to Paparazzo: Get a Real Job, You Faggot »