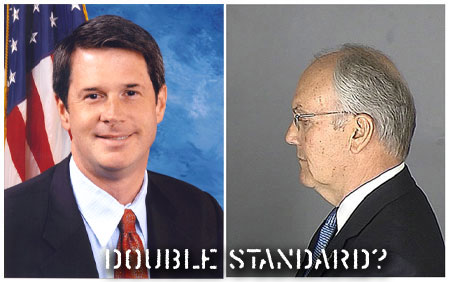 According to The Hill, the National Gay and Lesbian Task Force today will deliver a letter to Senator Barbara Boxer and Sen. John Cornyn, the Republican vice chairman of the ethics panel, claiming that the committee has singled out Craig for investigation because his behavior is homosexual while ignoring equally repugnant behavior by heterosexual Senator David Vitter of Louisiana.

Vitter’s name was found in the records of Deborah Jeane Palfrey, the D.C. Madam, and since then, according to The Hill, “allegations have surfaced that Vitter consorted with prostitutes in New Orleans. Jeanette Maier, who was convicted in 2002 for running a brothel, has claimed Vitter was a client.” Vitter has been an outspoken defender of “the sanctity of marriage”.

An ethics probe of Vitter has yet to be launched. The Hill says that the NGLTF sees it as evidence of a “witch hunt motivated by the homophobia of GOP Senate leaders.” The group is demanding a response.

The letter from NGLTF vice chairman Matt Foreman is scheduled to be delivered today and reads, in part: “We are writing to state the inherent contradiction between your treatment of allegations of ethical misconduct by Senator Larry Craig and Senator David Vitter and to insist that you open an investigation into Sen. Vitter’s conduct. There is no explanation for the diametrically opposed responses to these two situations, other than hypocrisy tinged by homophobia. There are only two ways to resolve this: drop the investigation into Sen. Craig or investigate the allegations surrounding Sen. Vitter.”

The Hill notes that although there has been no investigation of Vitter he did receive a standing ovation from the Senate Republican Conference after apologizing for the DC Madam allegations.