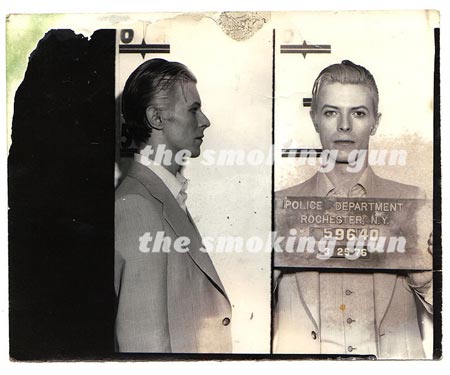 These days we’re used to seeing Hollywood mugshots paraded across the media. But the Smoking Gun has turned up a rare artifact — the 1976 booking photo of androgyne David Bowie.

They write: “[The Bowie mugshot] was snapped in Rochester, New York following the singer’s March 1976 arrest on a felony pot possession charge. Bowie, 29 at the time, was nabbed along with Iggy Pop and two other codefendants at a Rochester hotel following a Saturday concert. Bowie was held in the Monroe County jail for a few hours before being released. The Rochester Police Department mug shot was taken three days after Bowie’s arrest, when the performer appeared at City Court for arraignment. The photo was provided to TSG by a Rochester man who is seeking to sell the one-of-a-kind image.”