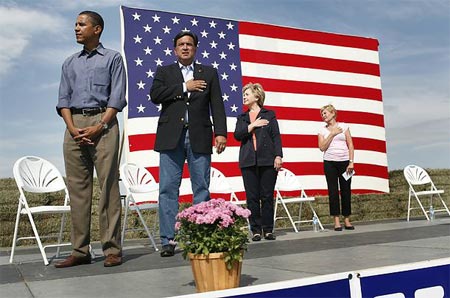 Barack Obama responded on Wednesday to a photo that has been circulating since it was taken at Iowa Senator Tom Harkin’s annual Democratic fundraiser in September, showing him alongside candidates Richardson and Clinton. His two rivals have their hands to their hearts while Obama’s are folded neatly below his belt. Obama opponents have circulated the photo in emails claiming it reveals Obama’s lack of patriotism.

Said Obama: “This is the classic dirty trick of the campaign…This is just so irritating. This was not the Pledge of Allegiance. This woman was singing the Star Spangled Banner. Now, I was taught by my grandfather that you put your hands over your heart during the Pledge of Allegiance. The Star Spangled Banner, you sing. So that’s what I did. These aren’t the only e-mails that are going out. You’ve got e-mails saying that I’m a Muslim plant that’s trying to take over America and this and that and the other.”

He also instructed the voters who asked him about the photo: “If you get this e-mail from someone you know, set the record straight. You don’t have to curse them out, just tell them that they are misinformed.”