Rosie O’Donnell, whose tendency to spew forth unedited has garnered her as much fame as it has trouble, now says that recent reports of a chat show gig on MSNBC have been ruined because she opened her mouth to soon. She writes, on her blog: 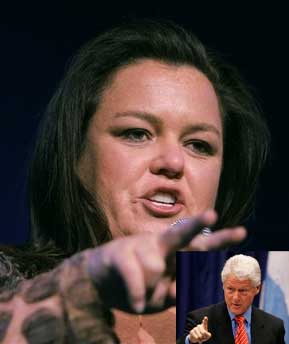 That’s a shame. We would have definitely tuned in. Rosie made an appearance at the New York Comedy Festival Tuesday night, Page Six reports, in which she told the audience that Bill Clinton had sent her a card after she “slammed” him at a comedy performance at the Mohegan Sun Casino Hotel following the Lewinsky affair.

Said O’Donnell at the casino show: “He disgusts me. And I know I’m not supposed to say this because I’m a good Democrat, but I didn’t want to [talk] to him because he lied to me when he said, ‘I did not have sexual relations with that woman,’ and then put the scarlet-letter [bleep]-job on her for the rest of her life . . . I still hate you!”

Rosie told the comedy fest audience she called the phone number attached to the note and talked to the former pres: “My knees got weak. I was like, ‘Can I [bleep] you?’ No, I didn’t say it, but I felt it – I was like, ‘Whoa! Whoa!’ And he said, ‘I was at your show the other night, and I was sorry that you didn’t come over and say hello to me. And I know that you’re still harboring some hard feelings. And I said, ‘You know, listen, here’s the deal, dude. I’ve been disappointed by men my whole life. I loved JFK, my mother loved JFK, and you were the JFK to me. And you let me down, man. You killed me and that hurt me a lot, and when you hurt me, I don’t know, I didn’t expect that out of you and I thought you could do better for your wife, for the country and just in general.”