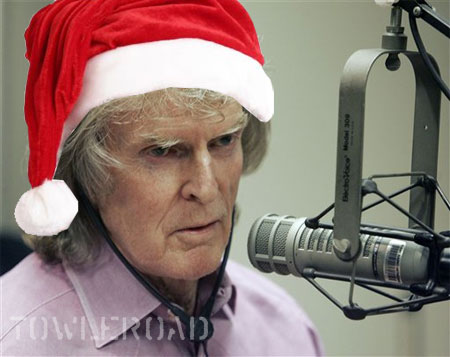 Santa Clauses in Sydney, Australia have been told to say “Ha Ha Ha” instead.

Agence France Presse reports: “One disgruntled Santa told the newspaper a recruitment firm warned him not to use ‘ho ho ho’ because it could frighten children and was too close to “ho”, a US slang term for prostitute.”

The spokeswoman for a group that campaigns against media that might sexualize children balked: “Gimme a break. We are talking about little kids who do not understand that ‘ho, ho, ho’ has any other connotation and nor should they. Leave Santa alone.”

A spokesman for the company hiring out the Santas, Westaff, reportedly said the directive would be left up to each Santa’s discretion.

The only way I’d possibly be offended was if Don Imus had donned the red suit as a bell-ringer for the Salvation Army.

Previous Post: « Lakers Coach Phil Jackson Apologizes for Brokeback Remarks
Next Post: Adam Sandler Out to Show Daniel Craig Up in His Squarecuts »