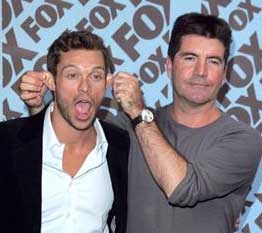 “If I was, why hide it? It’s not as if the music business would be an odd place for a gay man to work. And anyway, if I was trying to hide the fact that I was gay, I would be off playing rugby every Saturday, wouldn’t I?”

Back in September, it was reported that Cowell had fired X-Factor judge Sharon Osbourne because he was tired of her telling everyone that he was gay. Producers reportedly convinced Cowell to give Osbourne a second chance.

And, of course, on American Idol, Cowell and host Ryan Seacrest have kept alive a long-running series of innuendos about one another’s sexuality.

Cowell did offer the Daily Mail a few true details about his personal life: “I have not had cosmetic surgery…Yes, I’ve had Botox, but not in an obsessive way. Then again, every guy I know who works in the City has had it now..I’ve never dyed my hair, ever, and I wouldn’t. But yes, I like to take care of myself. I work out. I take lots of vitamins. What can I say? I think I look good for my age [he’s 48]…I can’t think of one person who is on TV who isn’t vain. It’s the nature of the beast. If you are on TV then you have a vanity, for sure. Just admit it! Why not?”