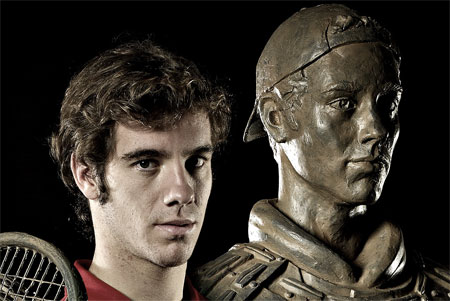 Frenchman Richard Gasquet, recently immortalized as a terra cotta warrior for his appearance at the Shanghai Tennis Masters Cup, gave an interview following his matches there, Outsports reports, and reaffirmed the fact that he’s not gay, even though he wasn’t even asked.

Q. Now your matches are finished. Do you still have any plan to go around the city maybe with your uncle or your girlfriend?

RICHARD GASQUET: My uncle? No. My girlfriend, no. I have no girlfriend, so I will try to find one, one Chinese girl. Why not? Why not? I lost 6-1, 6-1. It will be very hard for me tonight. I’m ready to lose, you know.

Q. Who is the girl watching your match with your uncle?

RICHARD GASQUET: Not my girl. I don’t know. Not my girl, for sure. No, no, no, I have just friends. Men friends, but I’m not gay.

You may remember in July of last year that Gasquet, now ranked #8 in the world, denied he was gay after French magazine Le Point printed a rumor that he was having an affair with 46-year-old married French businessman Arnaud Lagardere. Said Gasquet at the time: “I was absolutely not happy about that. This question has come back hundreds of times, and every time someone turns up saying, Oh, I have evidence. It is just bullshit. Neither him nor me are homosexuals. It’s absolutely obvious.”

So if it’s so obvious, why the need to repeat it?