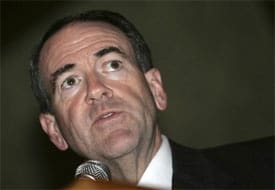 Said Huckabee in the survey: “If the federal government is truly serious about doing something with the AIDS virus, we need to take steps that would isolate the carriers of this plague…It is difficult to understand the public policy towards AIDS. It is the first time in the history of civilization in which the carriers of a genuine plague have not been isolated from the general population, and in which this deadly disease for which there is no cure is being treated as a civil rights issue instead of the true health crisis it represents.”

Huckabee also said that AIDS research received a disproportional amount of federal funding compared to that allotted for cancer, diabetes and heart disease.

Added Huckabee: “In light of the extraordinary funds already being given for AIDS research, it does not seem that additional federal spending can be justified. An alternative would be to request that multimillionaire celebrities, such as Elizabeth Taylor (,) Madonna and others who are pushing for more AIDS funding be encouraged to give out of their own personal treasuries increased amounts for AIDS research.”

On FOX News Sunday, Huckabee was asked about the remarks.

Said Huckabee: “Chris, I didn’t say that we should quarantine. I said it was the first time in public health protocols that when we had an infectious disease and we didn’t really know just how extensive and how dramatic it could be and the impact of it, that we didn’t isolate the carrier.”

Quarantine is, in fact, defined as a “strict isolation” intended to prevent the spread of disease.

In any case, Huckabee stands by his 1992 comments, according to his interview with FOX. (transcript)

Think Progress reports: “As Fox’s Chris Wallace noted this morning, ‘seven years before’ Huckabee ‘made’ his statement, the Centers for Disease Control (CDC) ‘said that AIDS could not be spread by casual contact.’ At the time of his comments, the CDC had recently reported that there were almost 200,000 AIDS patients in the United States, and 126,159 people had already died from the syndrome.”

Last week, in an interview with GQ Huckabee stated that gay marriage would mean the end of civilization.

You may have missed…
Mike Huckabee: God and Prayer Responsible for His Recent “Surge” [tr]
Huckabee to GQ: Gay Marriage Will End Civilization [tr]