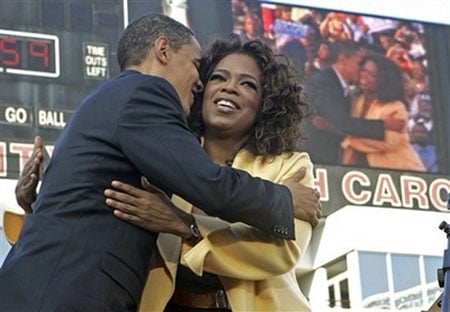 This weekend’s Democratic horserace was all about Oprah Winfrey and Barack Obama.

In Des Moines, Iowa, 18,500 people showed up to see Winfrey campaign for Obama:

“In Des Moines, spectators lined up hours early. Cameras flashed in the capacity crowd during Winfrey’s speech, which opened and closed to loud applause and was frequently interrupted by cries of ‘We love Oprah.’ Winfrey said she felt nervous and “out of my pew” as she addressed a gathering hall packed shoulder-to-shoulder in the largest gathering of Iowans in the campaign this year. But she did not hide her political convictions, making an argument for change from the Bush administration other than another Clinton in the White House.”

The Oprama Tour then moved to South Carolina, where the tone turned decidedly more Christian, according to Politico:

“‘I give all praise and honor to God,’ Obama began. ‘Look at the day the Lord has made.’ Obama’s wife, Michelle, opened the rally with a description of her husband that could, at moments, have been a description of Jesus Christ. ‘We need a leader who’s going to touch our souls. Who’s going to make us feel differently about one another? Who’s going to remind us that we are one another’s keepers? That we are only as strong as the weakest among us,’ she said, echoing biblical passages. Winfrey also touched on Christian themes that had not been highlighted in Iowa. ‘It’s amazing grace that brought me here,’ she began, adding that she was ‘stepping out of my pew’ – television – to engage in politics. It isn’t enough to tell the truth, Winfrey said. ‘We need politicians who know how to be the truth.'”

The duo then made their way to New Hampshire, where ‘Oprahpalooza’, as many are calling it, was “the most attended political event in recent history,” according to the Boston Globe:

“On the weekend before the New Hampshire Primary in 2004, Wesley Clark drew 3,000 with filmmaker Michael Moore. Then the weekend before the general election that year President Bush tried highly unsuccessfully to fill the Verizon Wireless Arena and the next day John Kerry held a 5,000 person rally in the streets of downtown Manchester. The event was also remarkable for its stagecraft. Over 30 television cameras, blaring music, grand, long entrances from both Oprah and Obama with standing ovations added to the idea that something was different about this rally. The crowd clinged to Oprah and her stories. Teenage girls shook like they saw a member of the Beatles when she was introduced to a 30 second standing ovation. But while Obama started strong he also went long — some 40 minutes — and some yawns were visible in the audience.”

Meanwhile, civil rights figure Andrew Young and former mayor of Atlanta made headlines with an online interview in which he said Barack Obama may be too young for the job.

Young said Hillary had Bill Clinton behind her, strengthening the “machine” that could not only fight off brutal attacks from rivals but also get her elected: “Bill is every bit as black as Barack,” and joked, “He’s probably gone with more black women than Barack.” Said Young: “I want Barack Obama to be president — in 2016…It’s not a matter of being inexperienced. It’s a matter of being young. There’s a certain level of maturity … you’ve got to learn to take a certain amount of (expletive).”

Rival candidates did their best to attempt to counterprogram the Oprah juggernaut, with Hillary Clinton enlisting Bill in South Carolina and Chelsea in Iowa, and Edwards holding a strategically-timed conference call:

“[Teresa Wells, a spokeswoman in South Carolina for the Edwards campaign] added that the conference call was held in part because some of Mr. Edwards’s top African-American endorsers are frustrated when they see the news media portray the campaign as ‘a two-person race for the African-American vote and we’re not in it.’ She said that on the ground they see blacks supporting Mr. Edwards, but that is not conveyed by the media.”