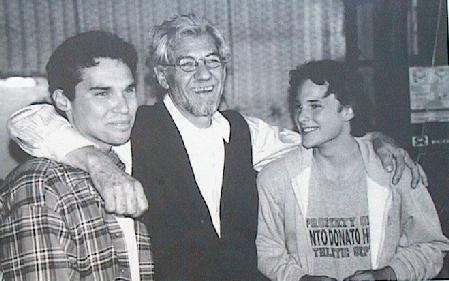 Filmmakers and actors who worked with the late Brad Renfro have been posting tributes on their blogs, notably Sir Ian McKellen and filmmaker Bruce LA Bruce. 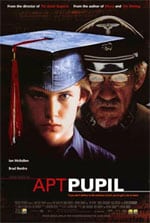 Ian McKellen recalled working with him in Apt Pupil (pictured above, with director Bryan Singer): ” In Hollywood he was a teenage charmer, chaperoned by his beloved grandmother and by his admirers who protected him as best they could from the dangers of being a child in a careless adult’s world. On set, he was blusteringly confident although it was obvious he would have benefitted from training as an actor. Yet, as Todd, the disturbed teenager in Apt Pupil, he tapped into an inner demonic world and carried the film on his young shoulders. Off the set he played football, played his guitar and one magical evening I shall never forget, invited me to his home in the Hollywood Hills. We chatted a bit about acting and his dreams to direct films, to write music and to return to Tennessee. When he heard a dog barking wildly across the valley, he mimicked the animal and the dog replied; a kid at play but capable of growing into someone special. He longed to belong in the alien world which perhaps in the end overwhelmed him. He was only 25 and it is dreadful we shan’t see all that he might have achieved.”

AFTER THE JUMP, an excerpt of an article from Canada’s Exclaim magazine in which director Bruce LaBruce relates the story of an evening he spent with 17-year-old Brad Renfro and actress Dominique Swain, which ends with a bit of sad foreshadowing: 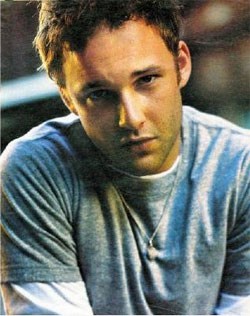 Here and there I hear snips of the young stars’ stories. Brad was discovered at the tender age of ten to appear in Joel Schumaker’s The Client , shot in and around Brad’s hometown of Knoxville. His parents have a shady past, something about the illicit selling of milk and cookies and birthday cake and ice cream. There’s a bizarre story about one of his relatives putting out a contract on the life of his little sister and his grandmother, of both being shot and both surviving. There’s the fact that he has to go back to Tennessee to face charges of grand theft auto and possession of cocaine and marijuana, which I only mention because it’s already all over the internet. He’s such a sweet boy though. He adopts me as his Aunt Bruce (“you must admit you’re pretty effeminate, and you should be proud of it,” he learns me), probably because he’s used to being adopted by gay director types (Joel Schumaker, whom he’s stayed with; Bryan Singer). He promises his grandmother he won’t leave the hotel again tonight.

We’re on the way to the jacuzzi. Four of us have made it this far; Robin Fuckin’ Black has gone missing. Fro brings his guitar and Dominique brings the cigarettes, Mark and I bring our tattoos but the stolen Jägermeister has gone missing. We hit the jacuzzi in our underwear as several middle-aged men ride stationary bikes and run on tread mills on the other side of the room. The lights of the city lay before us in the darkened morning. Dominique surfaces and smiles.

Back to Dominique’s room for some mini-bar candy. We decide to head to my apartment because we can’t get beer from room service until 11 a.m. and it’s only seven-ish. Brad puts on his pyjamas and his parka and his black oxford shoes. He looks like an eight-year-old kid who’s just come back from the drive-in. He plays and sings his guitar, bluegrass, for me and Mark and Dominique and the cabby in the umpteenth cab of the night. He’s in love with Dominique; she fends off his charming barrage of sweet-talk like a seasoned pro.

At my apartment the morning sun pours in through the windows. We head for the kitchen and the beers. Brad freaks out at the photo montage of River Phoenix that hangs over my kitchen sink, which includes the photo published in the National Enquirer of River in his casket. You see, people often compare Fro to the late, great Phoenix. Fro tells me I’m morbid, then shakes it off.

LaBruce recently posted a remembrance on his blog as well.

An autopsy is planned for today to try and determine what caused the actor’s young, tragic death.

Previous Post: « Clay Aiken Snaps at Another Reporter Over the “Gay” Question
Next Post: Majority in Maryland Support Some Form of Legal Same-Sex Union »