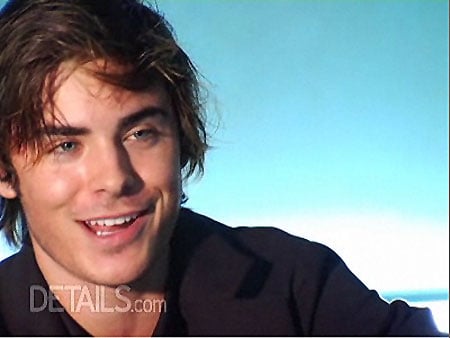 “Somewhere in the world, right this second, a little gay boy is making a plastic Zac Efron kiss another plastic Zac Efron. Bizarrely, the actor’s two biggest roles so far have both led to the same non-biodegradable immortality. The High School Musical ‘Troy Bolton’ doll version of Zac Efron was followed by its own doppelgänger: the Hairspray ‘Link Larkin’ doll version of Zac Efron…When I bring up notorious ‘Queen of Mean’ gossip blogger Perez Hilton, who is obsessed with insinuating that Efron—whom he’s nicknamed ‘Zacquisha’—is gay, Efron’s response is almost surreally nice: ‘I know it’s very addictive to read that kind of stuff. It’s entertainment. Perez has obviously struck a chord in the public eye. He’s doing something right. That deserves admiration—I think he does a great job. Um—’ He pauses for a moment, then adds, ‘Honestly, if the worst he can say about me is that I’m gay, then I think I’ll be fine. I can handle it.’ Has he met Perez? ‘No, I haven’t yet. But I look forward to it,’ he says, laughing. ‘I think it’ll be a fun conversation.’ Efron’s soft-and-cuddly nice-guy veneer, it turns out, may actually be bulletproof armor.”

Head over to Just Jared for a gallery of screenshots from the video interview, which I’ve posted AFTER THE JUMP…