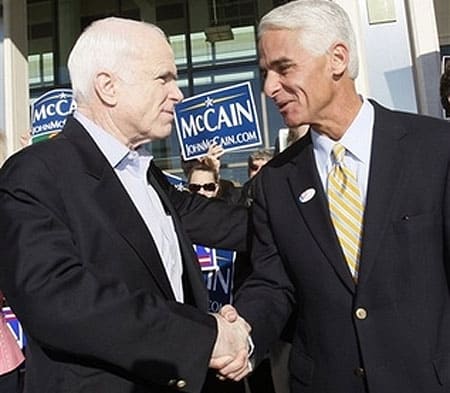 Marc Ambinder at The Atlantic reports on a new robo-call from the McCain campaign in Florida, where he and Romney are doing their best to destroy one another.

This robo-call, Ambinder notes, raises “the specter of scary homosexuals and their ‘special rights.'”

The call: “Mitt Romney thinks he can fool us. He supported abortion on demand, even allowed a law mandating taxpayer-funding for abortion. He says he changed his mind, but he still hasn’t changed the law. He told gay organizers in Massachusetts he would be a stronger advocate for special rights than even Ted Kennedy. Now, it’s something different.”

Ambinder notes that it’s not clear whether McCain (pictured above with Florida governor Charlie Crist) personally approved the call.