Following a request by Democrat Dennis Kucinich and Republican Albert Howard, the New Hampshire Department of State issued a press release on Friday that a recount of ballots cast in the primary would go forward. 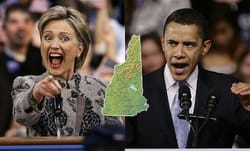 The HuffPost reports: “The demand for a recount isn’t about the New Hampshire primary–anything short of a result showing Obama winning by more than say, 5% would still put the vote within the realm of a Clinton ‘comeback’ from Iowa. It’s about the amount of distrust that voters have in the machine voting systems–machines which studies have shown to be not just hackable, but often poorly conceived and constructed. People who conduct business over cell phones, computers, and ATMs are nervous about electronic voting because they feel that something about the whole process has gone amiss; the voting machines’ source codes are proprietary to the companies so any flaws remain hidden except when extensive studies, such as those conducted by Ohio and California are done.”