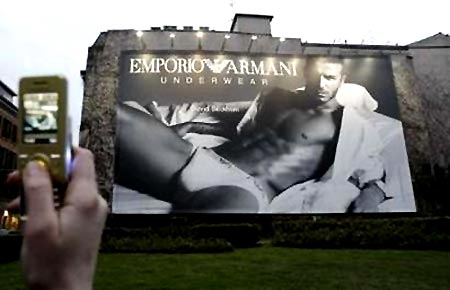 Victoria Beckham took a break from the Spice Girls tour to attend the Roberto Cavalli show at fashion week in Milan, where last week a gigantic version of David Beckham’s Emporio Armani ad was erected at the intersection of Via Cusani and Via Broletto.

She didn’t mince words about the giant billboard:

“I’m proud to see his penis 25 foot tall. It’s great. It’s huge. It’s enormous. Massive. If I looked like that I’d walk down the street in my panties too.”

The remarks follow her December boast about the football player’s package: “I’m proud I still have a really good sex life with David. He is very much in proportion. He does have a huge one, though. He does. You can see it in the advert. It is all his. It is like a tractor exhaust pipe!”