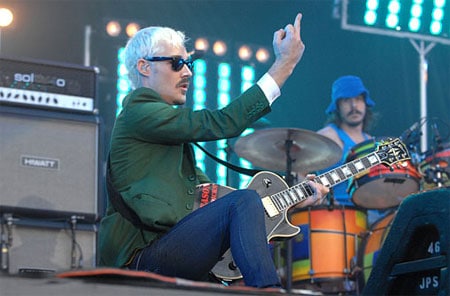 Australian indie rock band Silverchair’s frontman Daniel Johns took a moment during Sydney’s Big Day Out music festival on Monday to relay a special message about who he screws around with.

The Herald Sun reports: “For the past few years, there’s been speculation about Daniel Johns’ sexuality. But the Silverchair frontman wants everyone to know – he’s not gay. At Monday’s Big Day Out at Flemington, Johns told the crowd in no uncertain terms that he’s a red-blooded heterosexual male. ‘I’m not f—— gay,’ he said between songs. To show he doesn’t care what anyone thinks, Johns wore a lacy garter on stage. The talk about his sexuality has been around for years, but intensified this month when his split from wife Natalie Imbruglia became public.”