It’s a rock, people, says Space.com. Yeah, we all knew that already anyway. But of course they had to piss all over the mysterious Mars figure with a big article about “pareidolia” rather than just letting everyone continue to believe that there’s some Tusken Raider wandering around the Martian desert. 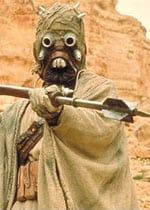 And in case you still don’t believe it’s a rock, they explain it for us:

“Strong evidence for this psychological explanation lies in the fact that the Spirit image does not look like Martian life (since we don’t know what life on Mars looks like), but instead resembles life here on Earth, specifically human life. The image is the result of human interpretation. If you look around the full image of the area (not just the close-up), you will find several rocks and features that resemble non-human Earth life, such as armadillos and snakes. In the right bottom corner, emerging from the sand, there is what looks like a lizard face wearing goggles and an airman’s helmet.”

Umm, if we don’t know what Martian life looks like, how do we know it doesn’t look like that? And why am I arguing with someone who sees a lizard wearing flight gear in that picture?

Anyway, on to this week’s other extraterrestrial encounter.

You know it was that sand person in his spaceship.