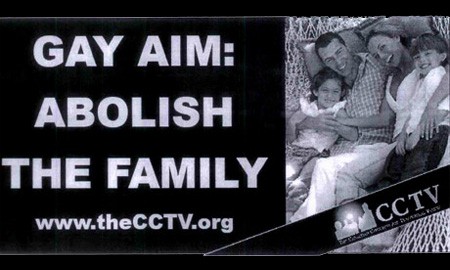 An advertisement from the Christian Congress for Traditional Values (CCTV) claiming that the main goal of gay people is to “Abolish the Family” has been criticized by the UK’s Advertising Standards Authority, which told the group to “ensure future campaigns were not presented in a way that could cause serious offence or which might lead to antisocial behaviour.”

The BBC reports: “The ASA upheld complaints against the ad, ruling that it could be inflammatory. The poster broke advertising rules on social responsibility, decency, matters of opinion and truthfulness, the ASA said. A complainant had said the advert did not accurately represent gay people’s views and was offensive. The watchdog said that a modern family was increasingly less likely to include a married man, woman and their children. ‘We considered the statement and the way it appeared was likely to cause offence both to the mainstream gay community and supporters of equality,’ said an ASA spokesman.”