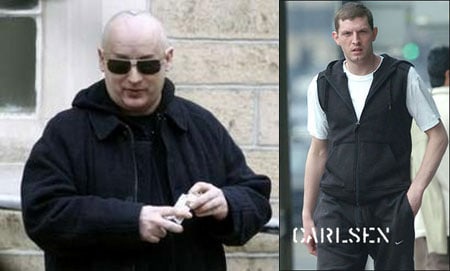 Dressed entirely in black, Boy George appeared for a 20-minute hearing at Snaresbrook Court in East London today, and spoke few words except to state his name, his “not guilty” plea, and tell the magistrate he understood the terms of his bail, according to the Times: 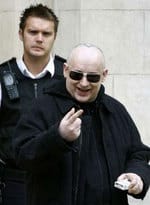 “The singer spent time talking with lawyers before leaving the court building, thanking fans who turned up to offer support. He said only ‘no comment’ to waiting press before leaving in a black Volkswagen people carrier. He was bailed to reappear for trial at the same court on November 24.”

Boy George has been ordered to stand trial for false imprisonment of a male escort. The Norwegian escort, Auden Carlsen, cliamed in April 2007 that pop star-DJ-fashion designer Boy George had met him on the dating site Gaydar and called him to his flat where George and another man chained him by a hook to a bed, took photos of him in kinky sex gear, and threatened him with whips and sex toys. The escort, Auden Carlsen, has claimed that he agreed to go to George’s flat at midnight as a £400 photographic model and not as an escort.