Earlier today the Advocate reported that the Obama campaign was doing targeted ad buys in Ohio and Texas in advance of the primaries there on March 4th. According to the Advocate, “Full page ads will appear starting this Friday in Outlook Weekly of Columbus, the Gay People’s Chronicle of Cleveland, the Dallas Voice, and OutSmart, which is Houston based.”

They report: “[Obama LGBT steering committee member Eric] Stern called the coordinated buy ‘the icing on the cake’ in terms of the Obama camp’s outreach to the gay community in Ohio and Texas. ‘It’s a direct appeal to LGBT voters asking for their support,’ he said, adding that the ad includes information about how people can get involved with the campaign. The Obama campaign has actively been trying to cut into the longstanding ties between gays and lesbians and Hillary Clinton.” 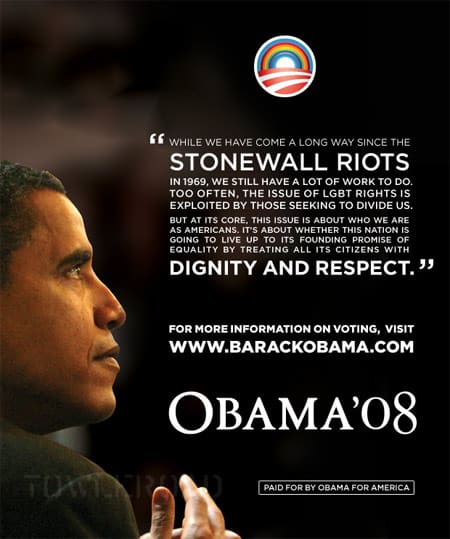 The Ohio and Texas versions, according to Stern, “include specific information on voting in those states and how to get involved with the campaign locally.” Stampp Corbin, the Co-Chair of the National LGBT Leadership Council, was the catalyst behind making these ads happen as a part of their efforts to mobilize and energize LGBT voters in Ohio & Texas.