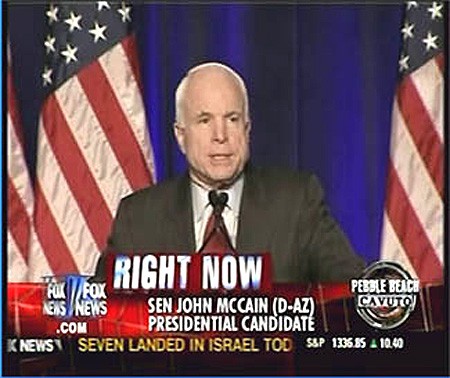 Is John McCain too liberal for the GOP? FOX News is already declaring him a Democrat.

In related news, McCain was booed by some conservatives at CPAC (Conservative Political Action Conference) in Washington DC when he spoke about illegal immigration.

Yesterday, Politico reported that CPAC was asking conference attendees not to boo McCain when he spoke.

The AP reports: “In a statement first obtained by The Associated Press, Dobson reiterated his declaration on Super Tuesday that he could not in good conscience vote for John McCain, the front-runner, because of concerns over the Arizona senator’s conservative credentials. Dobson said given the situation at that point, he was reluctant to choose between ”two pro-family candidates whom I could support’ — Huckabee and former Massachusetts Gov. Mitt Romney. But Dobson wrote that Romney’s announcement Thursday that he was suspending his campaign ‘changed the political landscape.’

Said Dobson: “The remaining candidate for whom I could vote is Governor Huckabee. His unwavering positions on the social issues, notably the institution of marriage, the importance of faith and the sanctity of human life, resonate deeply with me and with many others … Obviously, the governor faces an uphill struggle, given the delegates already committed to Senator McCain. Nevertheless, I believe he is our best remaining choice for president of the United States.”

And of course, if she’s true to her word, Ann Coulter will now be campaigning for Hillary Clinton.

(top screenshot via crooks and liars)

Previous Post: « Gossip Girl Guys Engage in Well-Dressed Three-way for Out
Next Post: Sean Hayes to Join Dancing with the Stars »