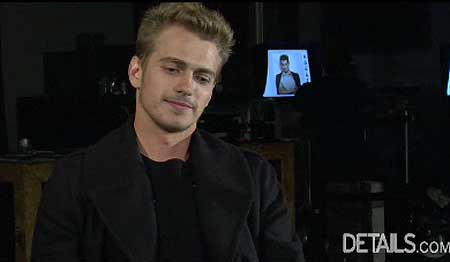 “And there are drawbacks [to fame], like people you don’t know starting to wonder whom you’re sleeping with—though Christensen’s been relatively lucky in this regard, mostly sidestepping invasive scrutiny. He’s been linked in the press, routinely and predictably, with whatever costar he’s currently filming with (Natalie Portman in Revenge of the Sith [he denies having dated her], Rachel Bilson in Jumpers), in the kinds of couplings that always carry a whiff of P.R. brimstone—and just as reliably dissolve shortly after opening weekend. He’s also, just as predictably, been the subject of speculation that he’s gay. He’s said on the record that he’s not. He’s also said he doesn’t mind people’s thinking he is. He knows they’ll talk either way.”

Check AFTER THE JUMP for the behind-the-scenes video…

Previously
Hayden Christensen Teleports to the Cover of Details [tr]