Vowing to “use the compensation for the development of the LGBT movement [lesbians, gays, bisexuals and transsexuals] in Russia,” Russian gay activist Nikolai Alexeyev asked the European Court of Human Rights to direct Russian authorities to pay them one million Euros in compensation for their treatment in the crackdown of the last two Gay Pride parades, both of which were banned. 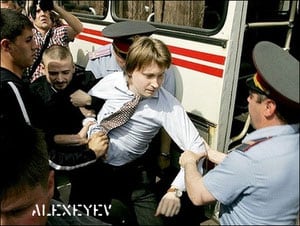 I posted about the violence organizers experienced during the Pride parade last May. British activist Peter Tatchell and Right Said Fred singer Richard Fairbrass were assaulted on camera. Tatchell and Fairbrass were both then arrested, along with Italian MEP Marco Cappato, German MP Volker Beck (who was assaulted at last year’s rally), the leader of GayRussia, Nikolai Alexeyev, and dozens of other activists. Thirty people were detained in all at what began as a peaceful demonstration meant to mark the 14th anniversary of the decriminilization of homosexuality in Russia. One of the organizers’ goals was to deliver a document to the mayor’s office signed by over 40 members of the European Parliament protesting Moscow Mayor Yuri Luzhkov’s decision to ban the march. In January, Luzhkov branded the march “satanic”.

Said Alexeyev of the appeal to the Court of Human Rights: “I am absolutely certain of our final victory in Strasburg. The Russian authorities arbitrarily deprived us of the right guaranteed by both the Constitution of the Russian Federation and the European Convention (on Human Rights).”