When in Rome, don’t do as the Romans do and touch yourself down there for good luck. A workman from Como, Italy has been ordered to pay a €200 fine and €1000 costs for “ostentatiously touching his genitals through his clothing” even though his attorney said he was merely adjusting himself through his overalls. 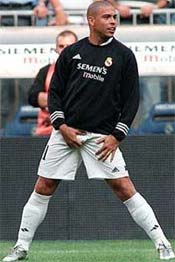 “The judges of the court of cassation stressed that the ban did not just apply to brazen crotch-scratching, but also to what might be termed superstitious pre-emption. Anyone who has seen a hearse go past in Italy, or been part of a discussion in which some terrible illness or disaster is mentioned, will know it is traditional for men to ward off bad luck with a quick grab at what are delicately called their ‘attributi’. The practice has become increasingly frowned on, but ‘io mi tocco i … ‘, which translates as ‘I touch my … ‘ is still a common phrase, roughly equivalent to ‘fingers crossed’. The judges helpfully suggested that those seeking reassurance should wait till they had returned to the privacy of their own homes before letting their hands stray trouser-wards.”