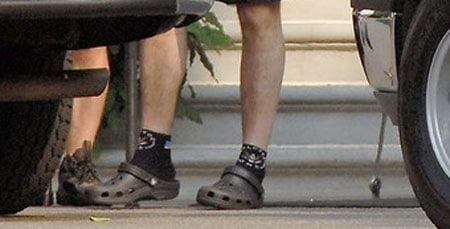 Last night Tim Gunn, whose Poindexter presence makes Project Runway, appeared on Late Night with Conan O’Brien and Conan had him analyze the fashion sense of a couple political figures, starting with a photo that was taken last summer of President Bush wearing a pair of Crocs and black socks with a Presidential seal on them.

Tim seemed a bit hesitant to lay into the president, saying “I can only imagine that the Crocs are a metaphor.”

Gunn: “When she was in the White House I really thought there was hope for her. And then she became the senator from New York and I thought ‘hurray, hallelujah, she’s from New York, she’s representing us, her fashion will really be ramped up,’ but I think she’s confused about what her gender is. She’s so mannish in her dress, and I believe the suits are probably made out of Kevlar. I just don’t get it. There is one Capitol Hill leader whose fashion I think can’t be beat and that’s Nancy Pelosi.”

Ouch. Of course, Clinton herself has recently poked fun at her own fashion sense but I can’t help but think calling her gender-confused might not sit too well with some people. Though it certainly inspired a roar from the audience.

Watch the full clip, AFTER THE JUMP…